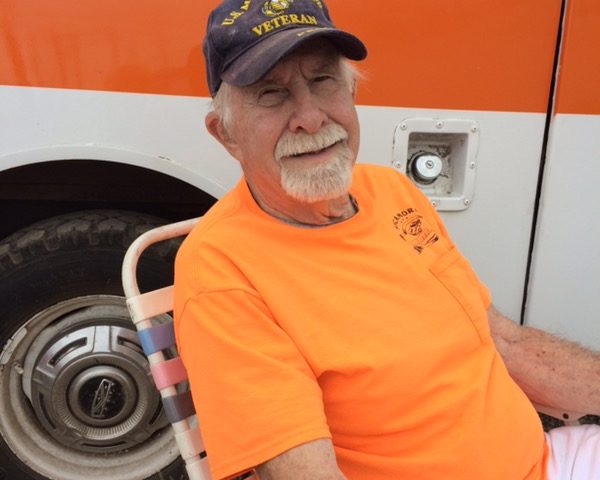 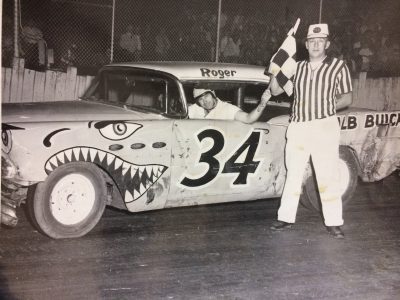 This week’s fan spotlight goes to someone that has a racing history longer than Sycamore Speedway does and what a perfect week to highlight this individual as this week is our tribute race to the Founders of Sycamore Speedway. Not only is this gentleman a fan of racing & of Sycamore Speedway but also one we are proud to have be a part of our race night team.

Roger Myers has a long racing history and I could sit and listen to him tell his stories for hours. It all started in 1945-46 when Roger was a helper on Hot Rods, but being a helper wasn’t satisfying his thirst for speed so in 1949-1950 he raced at Marvin Prather Speedway located on the corner of 14th St & Clark (now known as Prather Park) in Dekalb, IL. It was a ½ mile dirt track. For all you drivers that ask me to race with no roof…go back to the 50s because that’s how they all did it. To scary for my liking. Roger took a break from racing and joined the Marines from 1951-1954. Then in 1955, Roger raced at Raceway Park in Blue Island, IL. You could have seen him in Car #34 on this ¼ mile blacktop racetrack. So how did Roger find his way to Bob-Jo Speedway in 1963, my assumption was that being from Dekalb it was the closest track so why wouldn’t he race there. I was so wrong, it was a Sunday morning and his neighbor, Dave Meadowcraft, was out in his garage making a whole lot of noise, Roger, curious, heads over. Dave what are you doing to your wife’s car? Dave responds, I’m going racing and I have to get my wife’s car stripped out before she gets home from Church. And that’s how it all began for Roger & Bob-Jo Speedway. He left that garage and went to Buick Garage and built himself a Buick stock car. In 1963, there was 1 class here at Bob-Jo (Sycamore) Speedway, called the Stock Car Class in which they average 90 to 100 cars. Even though, Roger raced consistently at Bob-Jo (Sycamore) Speedway from 1963-1965, him and his crew traveled and raced all over Illinois. It was nothing for them to hit a race track in the morning and be back for time trials at Bob-Jo’s that evening. 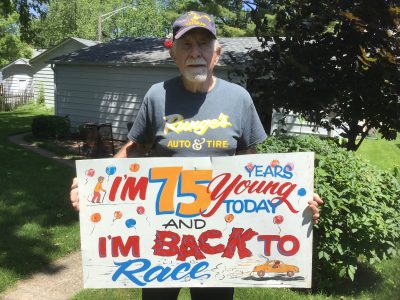 Another crazy to hard to believe story is when his race team was at Mizzon Speedway, down by Morris, IL, and blew a motor. Roger jumped in his personal vehicle and drove back to Dekalb and started getting the new motor ready, meanwhile crew team, Bob Beck & Kenny Cummings are in the back of a dump truck (aka their car hauler) and were disassembling the old motor. Yes, you read this correctly while driving down the road. Now that is some team work. They made it to Bob-Jo (Sycamore) Speedway for the trophy dash on the same day! As I am typing up these stories, I am just smiling for when Roger told them to me it was as if he was right back to that exact day reliving every moment of it. Roger expanded from the oval to Drag Racing in 1965, back in a Buick and took it to Byron Speedway. Other tracks he raced at included Rockford Speedway, Lake Geneva & US 30 Dragway. An unfortunate accident at Bob-Jo’s in the mid-60s took Roger from racecar driver to ambulance driver as we see him still today at Sycamore Speedway. When he was 75, Tim Runge of Runge Auto, made it possible for Roger to hit the oval again and he raced in the Spectator Races. Said it was just like he remembered it.

I asked Roger what brought him back to Sycamore Speedway year after year and without hesitation, he said it was because he loves racing! And his entire family knows, Racing comes First! Sycamore Speedway is a second home, the fans, drivers & co workers make him love every night of racing just like the ones before it. It so much fun to have Roger & Donna part of our Sycamore Speedway family. They both embrace the changes we have brought and help us to hold onto our history time and time again. So, if you are ever in need of a good ole story or a band-aid make sure to stop by our 1970’s ambulance in the pits and check in with Roger & Donna. I promise you its worth the pit stop.