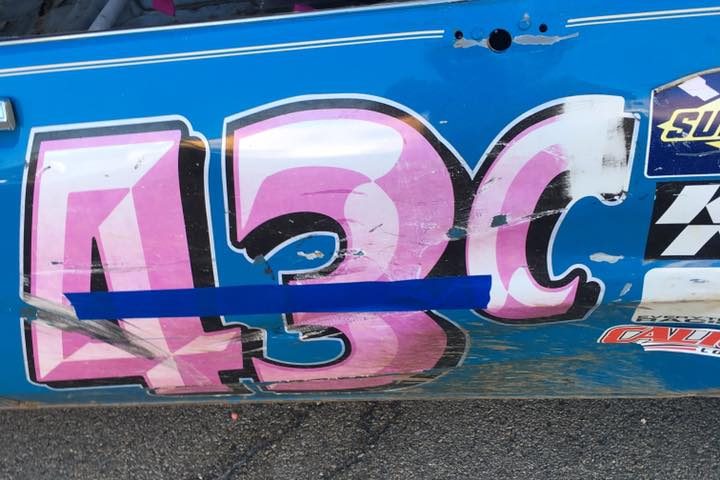 This past weekend was another for the books.  Sycamore Speedway started off Friday Night with action packed racing on the 1/4 mile. In the Spectator division, female, Mallory Jackson (92J) out of St. Charles took fast time and won the Trophy Dash.  On to the famous 25 laper.  the R1 of Dave Radloff found an opening and moved from fourth to first in 2 turns.  Mr. Radloff was able to secure his 3rd 25lap win of the season.

The Powder Puff Division has really started to heat up.  Ms. Mickee Runge, star in the rising secured her self in the number one spot in the points division.  This past weekend receiving a little pressure from team partner and competitor Starr Roach.  After the feature Runge and Roach are tied in points for First place.   Top three in the Powder Puff Feature went to the 93 of Becca Vodraska, 10 of Mickee Runge, and third to the 66xx of Megan Decker.

The 6 cylinder class of Socker Stockers is gaining new drivers every night.  This past Friday Matt Williams of the 99 car took fast time and the Feature went to the 117x of Adrian Rochelli.

The compact Combat Class is always improving, driver’s skills and car count.  the 32c driven of Johnny Lovett out of Dekalb took home the win.  Austin Stombress out of St, Charles, Illinois, rolled his 2nd car in 2 weeks.

In the Late Model Division points are getting closer and closer.  With only 2 nights on his belt in 2016 and a brand new car, built from scratch, Kyle Smith wheeled the number 52 car into the Aurora Auto Connection Victory Lane.

With only 2 years under way the roughly new Pure Stock Division has gained a couple new drivers and a few Rockford Speedway Road Runners, arrived to join the fun.  After a rocky start to the Heat, the Feature provided plenty of entertainment and driving ability for all to witness.

This next weekend at Sycamore Speedway, Drivers will be running Blue strips across their numbers to show support for Dallas, Texas and all Police Officers that continue to protect and serve.  Jopin us for a demolition derby each night