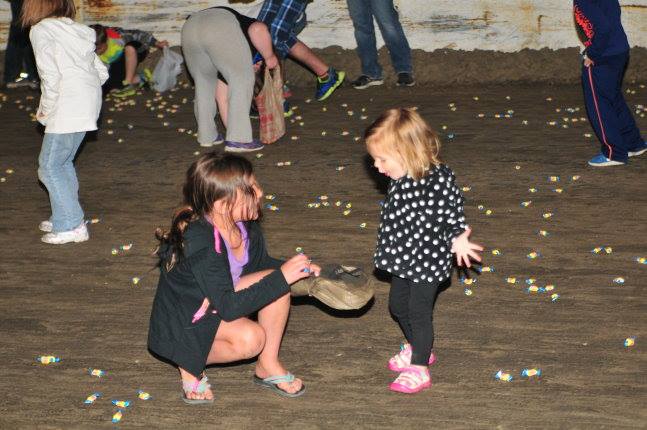 This past weekend the weather was beautiful in Maple Park and the surrounding areas.  Sycamore Speedway hosted their Friday Night Season Opener with a full Line up including; Spectator, Powder Puff, Socker Stocker, Compact Combat, Figure 8, One on One Drags and a Demolition Derby.  On Saturday, Sycamore Speedway had stock car racing plus FREE Bubble Gum Races for the kids.

Friday Night in the Spectator division, which is an 8 cylinder stock class, fast time went to Austin Stombres (54).  Mallory Jackson (92J) won the Trophy Dash and the 25 lap feature.  Starting 23 cars for a 25 lap feature the shoulder to shoulder packed Grandstands witnessed great racing, tons of action all in just 25 laps.  Speaking to General Manager/Promotor, Tiffany Gerace after the show, She said ” I couldn’t be more proud of my drivers,  The men and women raced very respectful, and provided the quality entertainment that Sycamore Speedway prides  itself on having.”  Gerace also announced, “being the first night of the Friday divisions, we were not expecting so many cars for the Compact Demolition Derby.  We Started more than 10…  if tonight’s show is a preview of the rest of the season, this summer will have the most entertainment!”

In the powder Puff Division, an all Female class, Starr Roach (43C) took fast time and the Trophy Dash Win. The Feature was won by Becca Vodraska (93) as she wheeled the pink and black Chevy Caprice to Victory Lane.

After all the Feature races Sycamore Speedway has the fun races.  A Figure 8, where the drivers race in an “8”.  Lots of action in the cross section!!! Then the One on One Drags.  These are 1/4 mile oval drag races between street cars.  Yes you can race the street car you drove to the track.  So much fun and the crowed cheered throughout the entire event.  One Driver in a white Ford Crown Vic, raced his race and lost control after the checkered and hot the back wall.  We couldn’t believe how the crowed roared and cheered at the individual.  Speaking to the driver after the races he said, “well I guess I have a Spectator car no LOL”.   The Demolition Derby was full of carnage.  More than 10 cars started and they beat each other for nearly  minuets.

On Saturday Night Sycamore hosted Bubble Gum Races.  If you haven’t seen these and you have kids it is a MUST!  Track officials line all kids up in age groups and they layer the front stretch with bubble gum and on the count of three the kids actually run on the track picking up as much gum as they can!  It was  the cutest thing and so much fun.  Kids have a blast and get to be on the race track!  In the Super Late Models Fast time and the feature went to Jay Brendle (15).  Late Model fast time was set by Matt McCain (02) and the feature went to Derek Walker (30).  Pure Stock fast time went to Mike Nelms (714), the feature was won by Nick Schnieder (26), a Rockford Speedway Road Runner that has fallen in love with Dirt.  Schnieder announced that he will be returning for the remainder of the season. Lastly the Modified Compact Feature was won by Scott Vetter (56c)

If you missed this weekend’s events.  Join the Speedway next weekend for their 53rd Season Anniversary.  Friday, May 27th for Spectator, Powder Puff, Socker Stocker, and Compact racing.  Plus Figure 8, One on One Drags and a FUll size Demolition derby. On Saturday Super Late Models, Late Models, Pure Stocks, Modified Compacts, and the Lightning fast 4-Bar Super Late Models